The Live your life cycle (link) sponsored ride took place to raise money for Motor Neurone Disease charity, and what an event it was with over 300 participants cycling from Ballincollig to Allihies in West Cork. The Rue family made a tremendous effort organising a fantastic event that everybody enjoyed. We were blessed with a fantastic summers day to make the ride, and of top on that they even organised a tail wind, result….

Ballincollig – Crookstown – Copeen – Ballylickey – Glengariff – Adrigole – Castletownbere – Allihies, 130 KM of undulating West Cork roads with a height gain of about 800 meters in the sweltering heat of probably 29 degrees. Luckily the event was so well organised there were plenty of feed stations offering water and food to keep all the riders in tip top condition.

From my point of view it was a great route and on top of that being a resident of Allihies I knew every stretch of the road as I have driven and ridden it many times, normally on a  motorbike though. We set off pretty much on the 9:30 time scheduled and I was aiming on a five hour ride so I wanted the first half to be fairly fast knowing that the second half was going to be hard work. Off we went and I settled into a nice pace all the way to Crookstown and up the hill to Béal na Bláth. I was on my own now so put up the pace passing through Copeen without stopping, sure I had water and a few bars in my pocket. The Cousane Gap appeared ahead of me and I rode up it suffering the last 500 meters where I was given a welcome bar of chocolate which I ate riding down the hill drinking the rest of my water arriving in Ballylickey just after the riders left on their shorter ride from there to Allihies. I stopped and took one foot out of the pedal to fill my bottle and get handed some food, I was totally shagged out and did not recognise anyone who was talking to me (sorry about that) I thought now I would slow down and meet up with some riders who would help me along, luckily in comes Aidan Forrest from Blarney Cycle shop and we rode on together with me following his wheel all the way to Glengariff recovering. Once there I was feeling much better and it became a more amicable concern of riding together up the hills out of Glengariff (tough climbing) and getting some more water at the top where we met up with most of the lads who had set off from Ballylickey. I was handed my water and just kept on riding not wanting to let my muscles seize up by stopping, the bottle drank by Adrigole and Aidan passed  me the “pouch” just like Froome in the tour de France my EPO for the day (Caffeine and Honey by the way) great stuff sorted me out and we rode on to Casteltown where we bumped into Niall Duffy who took this snap of us. 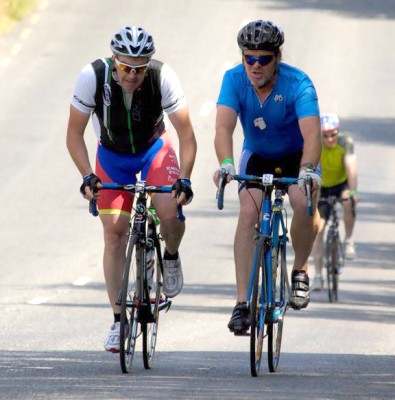 Aidan still had a bottle of water and I had half so we did not stop at BikeNbeara and kept on going. I was not looking forward to Goula before the ride, but all my training (and yes I did a fair bit) paid off and I was elated by now the ride was coming to an end Goula went fine just like at the end of a shorter ride. We were spinning past Cahermore football pitch and a guy called Rob (No Surname) joined us and we rode into Allihies totally happy with our performances. I set off for my ride and made it, racing no one but myself which is the way I have always been, a few pints later and I was “Delighted¨”

Much thanks and praise to Ollie and his family they did Betty proud, I sincerely praise them for all their logistical expertise, the bus to Cork, the sign in , the support crews vehicles and motorbikes. The list is endless. If you have not donated to the cause please do so now here.

Please do have another one in 2014 I will sign up for it tomorrow, cheque in the post.

Sorry. No data so far.